Howell, MI - Hunting and golf, two sports that have nothing in common...or do they? Hunters spend hours carrying their weapons and ammunition searching for their quarry, which generally hides in thick underbrush or long grass.

Golfers spend hours carrying their weapons looking for their ammunition, which is generally lost in thick underbrush or long grass. In the spirit of trendy cross-training, golfers at Hunters Ridge Golf Course will likely find themselves hunting both golf balls and birdies at this unique Jerry Matthews design.

The Miesle Family, owners of Hunters Ridge, left the dairy business in the mid 1990s (you could say they traded udders for putters) and hired Matthews to turn their rolling, grassy farm into a golf course. Opened in 1996, the links-style layout, complete with knee-deep fescue and expansive wetlands, represents a departure from some more well-known Matthews designs, such as Timber Ridge, which wind their way through dense woods.

Although a few holes do incorporate trees and brush, the overall linksy feel of the course makes it a unique addition to the Mid-Michigan golf scene.

The par-71 course measures a healthy 6,532 yards from the championship tees, but only 5,927 from the blues, 5,482 from the whites, and 4,642 from the reds; so aside from the tips, power is not critical here. The narrow fairways and the unforgiving, golf ball-munching, wrist-breaking fescue place a high premium on accuracy off the tee, however.

Not only are the fairways relatively narrow, several seem to funnel down into the fescue, so tee shots with just a bit too much side spin can easily land in the short grass and end up in the very, very long grass.

And be prepared: If your ball does go into the thick hay, the only way you will find it is if you step on it. Club Pro Ken Niblock calls the fescue their "magic rough," because, "you hit Titleists in but all you find is Top Flites, if you find anything at all." (Personally, this writer found Pinnacles and Maxflis to replace a few of his wayward Titleists.)

Playing conditions here are fabulous: The turf is bent grass from tee to green, with lush yet not "grabby" bluegrass rough. The first cut of rough is sometimes generous enough to slow errant shots heading for the giggleweed, but sometimes it is not, and balls that you would swear barely got to the tall stuff are never seen again....

The greens are in similarly great condition-medium-fast and very true. Several greens are tiered, and some feature one half that is nearly twice as deep as the other half, so pin placement can make a huge difference. Nos. 6 and 14 are two of the nicest greens, the former being wide and shallow with lots of undulations, and the latter two-tiered and well protected by a large bunker in front. Fortunately for players, however, these greens are not the sort that present tough reads from inside five feet: Knock it close and you can one-putt.

The only major weakness of the design is the rather wide separation of the gold tees (the tips) and the blue tees. There are a good many high handicappers who do not hit a very long tee ball, and do not like to play courses over 6,400-6,500 yards. But these same players also like to have some opportunity to flex their muscles, so they don't like to play courses shorter than 6,000 yards.

In the case of Hunters Ridge, the tips are too long for these players (especially if the tips are set way back on the extra tee box found on a handful of holes), but the blues (not to mention the whites) feel too short. If these players do (ill-advisedly) decide to play the tips, they discover some longish carries over wetlands off the tee (e.g., Nos. 4 and 6), and much longer second shots than they would be left with off the blues. So deciding which tees to play might be a real conundrum for some.

The occasional discrepancies that can be found between the yardage book, the scorecard, and the yardage markers on the course can also be somewhat distracting. For example, when you reach No. 4, a 384-yard par 4 with wetlands running from the tips to about 123 yard from the green, you'll find that the yardage book tells you to keep your driver in your bag (to avoid slicing into the marsh).

From the blues and whites, an iron is a good call, but from the tips, you'd need a well-struck long iron to have a good position into the green from the fairway. So the yardage book actually raises doubts rather than quashing them.

The stretch of holes from 4 through 6 are as pretty as any you will find in Mid-Michigan. And they are plenty tough, being the first, fifth, and third hardest holes on the course, respectively. No. 4, as just mentioned, has an intimidating tee shot over and past a fair stretch of wetland.

No. 5 is a lovely downhill par 3, measuring 199 yards from the tips. You'll need to carry marshland all the way to the green and stay out of the woods on both the right and the left. For golfers who hit bad slices, hooks, or clunkers into the marsh, Matthews has mercifully built in a drop area to the right of the green, a nice chip from which can save bogey (he adds knowingly).

The par-5, 543-yard 6th has three separate patches of wetlands to deal with: one off the tee (198-yard carry from the tips), one across the fairway about 230-yards from the green, and one guarding the green front right and front left. From the tips this tee shot, like several here (e.g., Nos. 4, 6, 12), is through a chute of trees, making them appear more difficult than they really are.

Holes number 15 and 17 are two more examples of yardage troubles. No. 15, according to the yardage book, is 403 yards from the tips. Don't believe it! Trust the scorecard and the sign at the tee box - 363 is the actual yardage. So put that driver back and take out a long iron or fairway wood.

On a course that boasts five truly memorable par 3s, the 17th is the best - an absolutely beautiful downhill par 3 to a long, narrow green over a marshy valley (hence it is named "Valley"). But again the yardage is deceiving. The scorecard, yardage book, and sign at the tee box say it is only 171 yards from the tips. The brass yardage marker on the tee stand, however, reads 190 yards. Perhaps the card, book, and sign take the change in elevation into account, but it did seem longer than 171.

Finally, the 18th (556 yards, par 5) is a very nice closing hole with a tee shot over wetlands from the back two tees and water/marsh all along the right-hand side of the fairway. The green is the best part of this hole, though: It's small, heavily bunkered, and cut into the hillside below the deck of the log cabin-style clubhouse. A very pleasant way indeed to end your round at this little gem of a course.

In said clubhouse, you'll find Pro Ken Niblock and his personable staff. Ken offers a variety of lessons, including junior and lady group lessons, and his staff can help you if you want something as simple as a beer and hotdog or as complicated as planning a company outing. The only thing lacking here is a fully-stocked pro shop - the selection of apparel and equipment is rather limited.

At Hunters Ridge, you can have the best of both worlds - the obnoxious clothing and tramping about in nature of both sports, without having to worry about getting shot by your buddies (unless you walk in their line). And with luck, you'll bag a few birdies while you're at it. 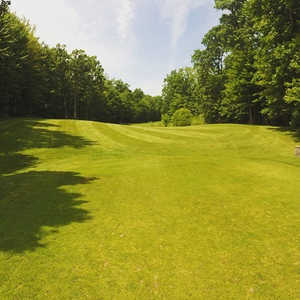 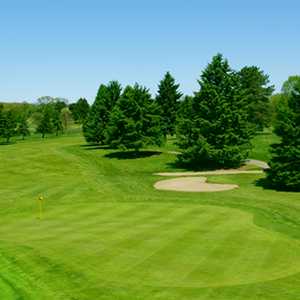 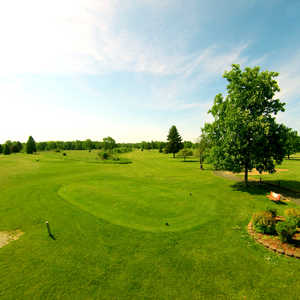