The Cedar River Course was Tom Weiskopf's first design in Michigan. It has been ranked as one of the top 100 resort golf courses in the country. The layout closely follows the natural contours of the landscape, providing a wealth of unique shot opportunities. The dramatic elevation changes define the traditional layout, which gives an excellent rhythm to the course.

The Natural at Beaver Creek Resort

The Natural at Beaver Creek Resort sits along the western shore of Otsego Lake. As its name implies, the course blends seamlessly into the beautiful surroundings. The challenging layout requires accuracy so don't let the scenery distract you too much. Trees line the meandering fairways and water hazards come into play throughout. Strategically placed bunkers lurk along the greensides as well.

The 18-hole Gaylord Golf Club in Gaylord, MI is a semi-private golf course that opened in 1975. Gaylord Golf Club measures 6472 yards from the longest tees and has a slope rating of 129 and a 71.3 USGA rating. The course features 4 sets of tees for different skill levels.

Eldorado, located just south of Cadillac, has built a reputation as one of the best golf values in the Great Lakes area. The championship layout sprawls across rolling hills laced with flowering wetland areas. The golf course features elevated tees and generous green complexes with subtle but tricky undulations.

Hawk's Eye Golf Resort in Bellaire is one of the top 15 public courses in the state of Michigan. The championship course is the centerpiece of a tucked away golf community in the northern part of the state.

The most coveted vacation spot in Michigan is the northwest coast, where you'll find some of the country's highest-rated golf courses as well as charming lakeside towns.

Much of the state's most spectacular coastline can be found here, making this an equally ideal summer haven for boaters and those seeking natural, freshwater beaches.

The epicenter of northwest Michigan is Traverse City, which is at the base of Grand Traverse Bay and has a metropolitan area of about 150,000. It's home to northern Michigan's largest airport, Cherry Capital Airport (TVC), named after Traverse City's prowess as the largest cherry producer in the U.S. Golf is abundant around the area, ranging from smaller daily-fee courses to venues such as Grand Traverse Resort & Spa and A-Ga-Ming Golf Resort.

A main attraction nearby is the Sleeping Bear Dunes, part of the nationally protected Sleeping Bear National Lakeshore. The Dunes are just a few miles from the Alister MacKenzie-designed Crystal Downs Country Club. Just south is Arcadia Bluffs Golf Club, situated roughly 200 feet above the lake, and rated by many as the top public course in the state.

A little farther inland, into some of Northern Michigan's largest hills, is Bellaire. This unique community is home to seven challenging courses, including multi-course Shanty Creek Resorts that includes Tom Weiskopf and Arnold Palmer designs.

To the north of Traverse City is a collection of towns strung along Little Traverse Bay. Petoskey anchors Charlevoix to the east and Harbor Springs, which has been a top summer destination for many years thanks to Boyne Highlands Resort, featuring 180 holes of world-class golf designed by some of the game's masters, including Trent Jones and Donald Ross.

On the other side of Little Traverse Bay, Bay Harbor Golf Club sits atop Lake Michigan. Along with its inn and spa, Bay Harbor has quietly become one of Northern Michigan's most luxurious golf destinations.

The Bay Harbor Golf Club offers the ultimate golfing experience with 27 holes including the Links, Quarry and Preserve, stretching along two and a half miles of Lake Michigan coastline. The Links has six holes right on the water, and on the last 19 holes, golfers can view Lake Michigan. The Quarry's nine holes were carved through hardwoods. The Links Course at Bay Harbor G.C. was designed by Arthur Hills, ASGCA, and opened in 1996. Boyne Resorts, Inc., manages this facility. 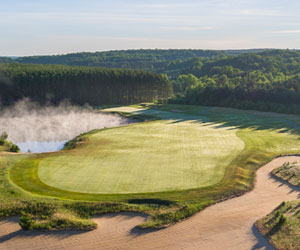 Unlimited Golf Packages from Boyne Golf
The Unlimited Golf Getaway package is perfect for the serious golfer that wants to pack in the rounds! The unlimited package provides you unlimited golfing access to five of BOYNE's outstanding golf courses and a night's stay.
Price range: $155
For more information click here.

Latest reader ratings from this area