GRAND RAPIDS, Mich. - Northern Michigan may be the summer golf haven of the masses but in-the-know Midwesterners head to a destination a little closer to home.

Rees Jones' Thousand Oaks is one of Grand Rapids many upscale golf options.
«

A former Champion's Tour stop (Egypt Valley Country Club hosted the Farmer's Charity Classic until 2004), Grand Rapids is ideal for those looking to skip the long drive to upstate hotspots like Gaylord, Traverse City and Boyne. The area gets a lot of attention from golfers in southern Michigan and northern Illinois.

"People from Chicago play a lot in Grand Rapids," says Greg Johnson, golf writer and columnist for The Grand Rapids Press. "They find it to be comparable golf and also a lot cheaper."

Michigan's second-largest city with more than 200,000 residents, Grand Rapids boasts a vibrant downtown complete with museums, shopping, bars and restaurants. Lake Michigan and the popular beach towns of Holland and Grand Haven are just minutes away.

"There's a bit of everything, if you know where to find it," Johnson says. "It's got the best muni in the state [L.E. Kaufmann Golf Course], a great university course [The Meadows at Grand Valley State University Golf Course], and The Mines is a nice edition to the downtown area."

The top shelf starts with Thousand Oaks Golf Club. One of the state's two Rees Jones designs (the other is the acclaimed Black Lake Golf Club in Onaway), this is the poshest of the city's public offerings.

Course officials say it plays more "up-north" than "Grand Rapids," and many parts of Thousand Oaks bear them out. Amenities include upper-echelon conditioning, detailed yardage books and the most advanced golf carts in the state, the GPS-equipped Club Car Champion's Edition.

Downsides are the Thousand Oaks residential community, which shares the property and occasionally intrudes a little too close to landing zones, and a course design marred by a few redundancies. It's also the most expensive public course in the city.

Taking into account facilities and location, Pilgrim's Run Golf Club in Pierson ties with Thousand Oaks for local honors. Factor in value and this is the best place to play in greater Grand Rapids.

The amenities are good but not superb, and Pilgrim's Run lacks a liquor license, which makes it a no-no in certain sects of the golfing community. There's no big-name designer; in fact, there's not really a designer at all: Architects Mike DeVries and Kris Schumaker consulted on the layout, but the actual design was done by six course employees, contributing three holes each.

Somewhat surprisingly given that back story, the course flows well, and there are no gimmicks, just great shot values, beautiful scenery and not a home in sight.

Other good bets are Boulder Creek Golf Club in Belmont and the city's Golf Club at Thornapple Pointe.

Grand Rapids' newest track, The Mines Golf Club, is just minutes from downtown, making it the most convenient of the bunch. While it ranks below the aforementioned courses in shot values and value for money, The Mines is a fun and unique test. The design by DeVries, one of Michigan's rising course architects, features two large dunes and massive, undulating green complexes.

One of the top publicly owned golf courses in Michigan, L.E. Kaufman Golf Course blends muni atmosphere and prices with country-club greens that are second to none in Grand Rapids, rolling fast and true. Built in 1965 to a classic Bruce Matthews design, this is a walker-friendly course with a creek than runs through landing zones, requiring irons off the tee on several holes. The picturesque 13th, a dogleg left through tall pines at the back of the property, is the most memorable. 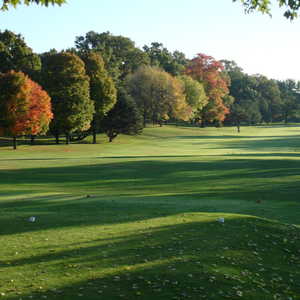 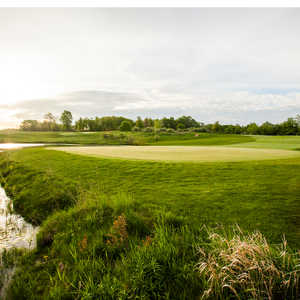