BATH, Mich. -- Daryl Kesler's playground just outside of East Lansing might as well be considered the best golf resort that isn't one.

The only thing Kesler's missing is the hotel (and a spa, if you really want to get picky). Everything else is intact.

A headline golf course? Check. Eagle Eye Golf Club by Chris Lutzke with an assist from his mentor, Pete Dye, is fantastic. A massive clubhouse, home to impressive banquet facilities, and the headquarters of the Michigan PGA Section are on site.

A strong secondary course? Check. Hawk Hollow Golf Club, a 27-hole Jerry Matthews design, would be the top course at most other clubs.

Family-friendly facilities? Check. The Falcon, a walking nine on the west side of Chandler Road, caters to families, juniors and beginners. The Little Hawk is one of only a handful of bentgrass, 18-hole putting courses anywhere.

Something few golf resorts have? Check. Last year, Kesler bought Woodside Golf Course, a nine-holer in nearby DeWitt Township that was built virtually by hand by the Kazenko family over the years. Lutzke is currently adding three holes to make it one of the first 12-hole loops in the world.

But the draw will always be Eagle Eye -- home to a replica of the famous island green on the Stadium Course at TPC Sawgrass -- and Hawk Hollow.

The mostly flat terrain doesn't add much visually, but the lines of attack are well thought out. Risk-reward becomes an issue on most holes, requiring players to tiptoe wisely around hazards or pay a steep price on the scorecard.

The bookend par 5s at nos. 9 and 18 demand essentially straight shots to avoid the pond that separates them. The signature swing at the 146-yard 17th hole is symbolic of the heroic elements that define Eagle Eye. There's pressure to make the right club selection and the proper swing, but that tense feeling in your stomach on the tee is the reason we all love the game. Dye praised the course at the grand opening in 2004.

"Some of mine (course designs) are pretty bad," Dye said that day. "This one is good. It's got a lot of ambience. It has a great look. This course is good enough for a major championship."

Water defines Hawk Hollow. Many of the par 3s play over lakes, but the tough water-laden par 4s are the holes that will wreak havoc on your mind. Water comes into play on seven of the nine holes on the back (holes 10-18). The fairway of the 23rd hole features water on both sides, so neither slicers nor hookers have an advantage.

The facilities are as good as Eagle Eye, just on a smaller scale. The 18,000-square-foot clubhouse welcomes players to stick around after golf and sit on the veranda overlooking the lake and the finishing hole. The Greg Webber Golf Academy gives lessons at Hawk Hollow's practice grounds, which include two driving ranges, a large putting green and a short game area with a bunker.

The location of Kesler's empire in the middle of Michigan's mitten is ideal on so many levels. Metro Detroiters can hit it on the way up and back down from a vacation up north. Or they can meet friends from Grand Rapids for a convenient round for both parties directly in the middle. In fall, Eagle Eye and Hawk Hollow are positioned perfectly for a Saturday morning round before a big Michigan State football game. 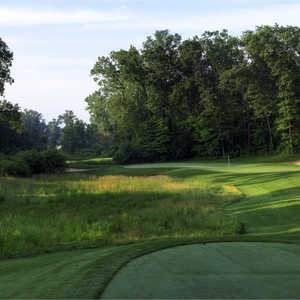 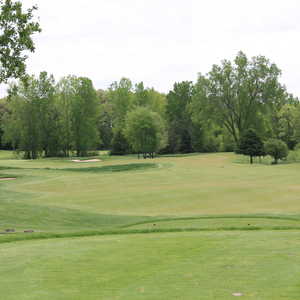