STANWOOD, Mich. -- It is Sept. 5, 2001 and the members of the media gathered in this western Mid-Michigan forest are witnessing something special: The grand opening of Tullymore Golf Club.

The plaintive tremor of bagpipes echoing up the 18th fairway, the throng of golf's literati, and the speaker's podium on the perfectly manicured fringe of the 18th green all bear evidence to the fact that this is not just any run of the mill grand opening, either.

Whispers, rumors, and "the buzz" have it that Tullymore G.C. has already vaulted to the top of many influential "must play" lists. So this really is something special.

Delicately routed through 800 acres of virgin forest, and encompassing 350 acres of wetlands inside its boundaries, Tullymore is truly a work of art. Course architect Jim Engh, whose work in Colorado, the Dakotas, and Europe have garnered immense critical and public acclaim, had never worked in Michigan before, and he brought with him a number of design techniques that cannot be found anywhere else in the state.

Golfers at Tullymore will encounter deep rivulets of blazing white sand creeping around green complexes that look like they were imported directly from Ireland's best courses.

However, since the yardage imbalance between the nines rests wholly on the fact that the front has three par 3s and the back has three par 5s, players shouldn't feel overmatched by the longer nine.

That is, they won't feel overmatched as long as they choose wisely from the five sets of tee boxes available. At 7,146 yards (rating 74.9, slope 148) from the championship tees, Tullymore can overmatch all but the very best.

In fact, I believe that only two other golf courses in Michigan have higher slope ratings. To demonstrate the formidable nature of the course, I will raise the specter of the par-3 12th once again, which measures a mere 257 yards from the tips. (But again, let us leave this demon lie for now.)

Tullymore is Jim Engh's first course in Michigan, and though he has no further projects pending in the state, he found course design here a wonderful experience.

"This is the most fun project I've been involved in," Engh said at the opening ceremony.

When I asked about the special demands of designing in Michigan, as opposed to the mountains, deserts, and plains he usually works in, Engh responded, "We didn't have to move much land here. And working with all the trees was nice -- something I haven't done for a while."

Engh was also amazed at the suitability of Michigan's land and climate for golf courses. Groundbreaking at Tullymore began on September 5, 1999, exactly two years prior to the grand opening. Looking around at the unbelievably lush rough, verdant fairways, and absolutely perfect greens, Engh -- along with the rest of the gathered admirers -- marveled at the conditions: "This is the single best new-course grow-in that I've ever seen."

Indeed, Tullymore rises from the mists of the thick woods as if it had existed here forever, like a pot of leprechaun's gold at the end of a rainbow.

The recurrent invocation of Ireland and its legendary links is actually justifiable in the case of Tullymore. Unlike the numerous courses in Michigan (and across the U.S.) that mimic European designs or conditions, Tullymore's Irish features are offset against the hallmarks of great Michigan golf. You won't find massive oaks, maples, and pines -- much less old-growth stands of them -- on the revered courses of Ireland. Nor will you find in Ireland wetlands teaming with wildlife from white-tailed deer to red-tailed hawks guarding the greens. And, by the same token, you won't find sand traps named "Patrick's Purgatory," hidden greens, grass bunkers and maniacal mounding anywhere else in Michigan besides Tullymore.

The design is true to both its influences and its environment. Somehow, the mix of Irish and northern Michigan works, and works to dazzling effect. Whether or not you love all of the singular characteristics of this layout, you will certainly remember them. And, since this is a course that will require some experience to score well on, you will most likely want to return again and again to use what you learned in previous rounds.

From the outset, new players here get the feeling that this isn't their fathers' Michigan golf course. As mentioned, only one par 4 or 5 green is visible from the tee, but this does not mean that there are lots of blind tee shots. In fact, there are only one or two. Instead, the layout consists of an entire city pound worth of doglegs, some of which can (and should) be carried, and others of which promise nothing but heartache for the foolhardy who try.

The 550-yard, par-5 first hole is the number five handicap hole - a stern test to start out. By the end of the number one handicap, 456-yard, par-4 second, you might well feel as if you've already been beaten about the head with a shillelagh. Nos. 4 and 5 are back-to-back par 3s, which are supposedly fairly easy. You may beg to differ, however, especially when you see the 234-yard 5th, which demands a carry from tee to green over an evil marsh, home of some very malignant golf demigods. Interestingly, if the pin is back left here, overhanging tree branches might just come into play.

No. 8, a 594-yard par 5, epitomizes Tullymore's outstanding collection of long par 5s. Blessed with a wide fairway (as are most of the holes here), the 8th tempts big hitters to go for the green in two. But think long and hard about this, because two staunch red pines stand sentinel between the fairway and green, and can even threaten third shots, much less daring seconds.

The par-35 front nine ends with a rare bird (which will relinquish even rarer birdies): A short (368 yards) par 4 that requires power off the tee. If you don't clear the house-sized mound at the corner of this 90-degree dogleg left, you'll have a wicked - but typically Irish - blind shot to the green. Sadly, I figured a 5-wood off the tee would be enough to get a view of the green. It was not, and my blind second turned into a miserable third out of the sprawling bunker named "Patrick's Purgatory" (after the son of Kevin O'Brien, Tullymore's and St. Ives' Director of Golf), and, eventually, into a round-wrecking triple bogey. Moral of the story: Don't be afraid to use your driver here.

Ah, and now we venture into the jaws of the beast, the 257-yard, par-3 12th, whose green is almost completely occluded by a fescue-covered hill.

According to O'Brien, "Half of the people who play this hole will love it. The other half will hate it."

Before you begin hating it, you should be aware that it's not meant as pure trickery. It is in fact modeled after the world-famous Dell Hole at Lahinch Golf Club in Ireland. And once on the green, you'll see how everything funnels into the center of the putting surface. Long won't hurt you here, and actually, if you can get your ball over the hill, there is a far better than average chance that you will find it at the bottom of the cup. Rounds of Tullamore Dew Irish Whiskey on you!

Nos. 13 (596 yards, par 5) and 16 (608 yards, par 5) are simply irresistible holes. Long carries off the tee and accuracy to the green are both required if you want to score well here. Both greens are tucked behind ponds, and are well-contoured. The 13th green slopes to the right, making it essential to stay below the hole. And the green of the 16th is fronted by a pond and postcard-perfect stone dam, along with a shimmering, snake-like bunker that I swear to God hissed at me when I tried to hit out of it.

Finally, the 535-yard 18th has to be one of the best closing holes in the state. Reminiscent of the 18th at Island Hills in Centreville, this classic hole dares you to carry as much water as you can, without running through the angled fairway. The pond runs all the way to the green on the left side, and promises to swallow over-drawn approaches from big hitters trying to get home in two. And of course, the bunkering and contouring of this green, like all the others here, calls for precision. Be sure to take time to gaze back up the fairway when you've putted out, and see if you can't hear bagpipe music, too.

Tullymore is simply a stunning beauty who can easily turn into a beast when mishandled. The majority of greens are surrounded by steep mounding, slope back to front, and incorporate two or more tiers. If you overshoot them, you'll end up with a downhill, often sideways chip from two-inch rough onto a sloping green that rolls around 10 on the Stimpmeter. There aren't enough curse words in the English language to express how frustrating shots like this are.

Conditions are unparalleled, as are the small touches: Greens and collection/shipping areas are as smooth as the proverbial baby's bottom, and yardages are marked clearly every 25 yards. This latter touch is so very crucial when the design places so much emphasis on solid short iron play. Just beware if you should happen to enter one of the hallmark bunkers: The sand, hauled in from Cleveland, is so white that it can cause temporary blindness in sunny conditions.

And, as one would expect at the sister course of St. Ives, which has earned one of two 5-star ratings in Michigan from Golf Digest, Tullymore's practice facilities and customer service are top-notch. The course even stations forecaddies with radio headsets on several holes to help track wayward tee shots and improve the pace of play. (Why don't more courses do this?)

The "buzz" emanating from the golf writers and dignitaries present at Tullymore's grand opening was not (totally) due to the complementary drinks: We were the fortunate witnesses to the start of something special. Tullymore has an Irish heart and northern Michigan's ruddy complexion; it's got the beauty of a princess, and the playful nature of a leprechaun. There may not be gold at the end of any rainbows up here, but there are pots of priceless golf stories waiting at the end of each and every round. 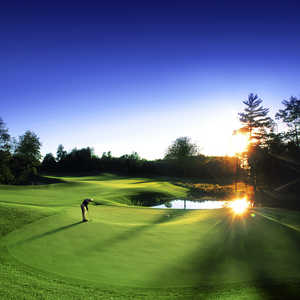 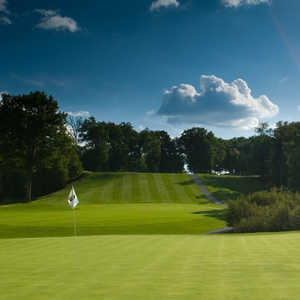 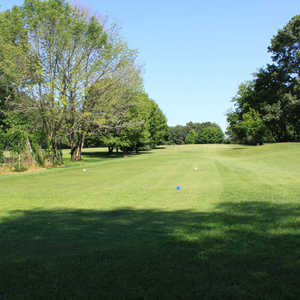