CLARKSTON, Mich. -- It's only fitting that the land used to create the Shepherd's Hollow Golf Club has been leased from priests.

The 420 acres that holds the 27-hole facility is truly divine. The course's marketing slogan is "heaven on earth," and it delivers.

Even before the opening of the first 18 holes in 2000, Shepherd's Hollow was one of the most hyped courses in southeast Michigan in years. Reviewers came back stunned that such a beautiful piece of land was left undiscovered and untouched for so long in Oakland County, not only one of the most affluent counties in Michigan, but in all the nation.

Normally, hype and reality don't see eye to eye, but this course is truly one that every diehard golf fan should enjoy.

In just the short time Shepherd's Hollow has been on the golfing landscape, it has taken over as the king of golf in metro Detroit. It's the one true must-play if you're visiting the Detroit area for business or pleasure, even if the drive up I-75 is long and usually snarled with traffic delays.

The rewards started rolling in for the course immediately. It was voted one of the "Top 10 You Can Play" by Golf Magazine for the year 2000.

The 2002 Crain's Detroit Business golf guide named the course as No. 1 in the five-county metro Detroit area - encompassing Livingston, Oakland, Washtenaw, Wayne and Macomb counties - edging out the popular duo of The Orchards Golf Club in Washington Township and The Majestic Golf Club in Hartland. The Orchards will host this summer's 2002 U.S. Public Links Championship.

Arthur Hills, the famed lead architect of Arthur Hills and Associates in Toledo, Ohio, called the land for Shepherd's Hollow "as good a piece of inland property as I've ever seen for a golf course." Not a bad compliment from a man who designed the Inverness Golf Club in Toledo, annually ranked as one of nation's top-50 courses, public or private, by Golf Digest.

"The site is just beautiful," said architect Steve DeForrest, one of the men who helped create Shepherd's Hollow. "The topography is so interesting. Usually you look at a map and you see patterns. This site is so convoluted, you really had to study the (topography) map to get a handle on it.

"Without the trees (that were cleared), the land looked just like a moonscape, with bumps and hollows and holes. It was pretty challenging to route the holes. We are pros at reading the maps, but we really had to study. That was the treat and the fun of this project. We built it without moving a lot of dirt. That is evident in the experience of the course."

Adding further complications to the routing of the holes, the property has been leased from the Society of Jesus, an order of Roman Catholic Jesuit Priests. The Jesuits still use part of the land. Once a seminary, the Colombiere Center is now an assisted-living resident for priests. The Center, near the entrance to the course, and a Jesuit cemetery, near the third nine of the property, both had to be taken into account during the initial layout of the course.

The Shepherd's Hollow experience starts as you wind your way off the highway. It's amazing how close the course is to two major roads - I-75 and the Dixie Highway - and how far away civilization seems. The long drive to the secluded clubhouse gives locals the feel of a northern Michigan resort.

As you creep through the towering pines and hardwoods, the beautiful 18th hole emerges - a 564-yard par-5, guarded by a small lake. Further up the road, pines also engulf the Southern-style clubhouse, sitting like a cabin in the back woods.

Grading scale Shepherd's Hollow is part of a trio of upscale designs in southeast Michigan managed by Mike Bylen, a local golf developer who's been a mover and shaker during Michigan's golf boom the last decade. Shepherd's is affiliated with the Pine Trace Golf Club in Rochester (also in Oakland County) and Cherry Creek Golf Club in Shelby Township, one of the state's best municipal courses.

Attempts to reach Bylen were unsuccessful, but he told the Michigan Golfer Magazine that it's "uncommon" to find a piece of property like Shepherd's Hollow still available for use.

"It is a very serene site. It is very much a sanctuary. That's the way it feels," he said.

Each nine plays to at least 3,585 yards. Four ponds speckle the property, but don't dominate the course.

There was enough land to build 36 holes, but developers wanted to make the site unique, keeping holes far enough apart to provide some privacy and a chance to bond with nature. Four sets of tees and wide, rolling fairways allow weekend players the chance to tackle the brute with enough success to keep from getting frustrated. With the varied topography DeForrest brags about, no two holes are the same.

The second hole welcomes players to taste the course's appeal. It plays 188 yards, all downhill over a bunker with a huge ridge that blocks the view of the front half of the green. No. 3 is a short par-4 of 345 yards that plays all uphill between a horde of bunkers, which are unique to the course.

"The bunker style there is different than any Arthur Hills course," DeForrest said. "(Mike Bylen) wanted a different look with the sand higher on the faces. The look is distinctive in that setting between all the trees."

Although surrounded by plenty of other noteworthy holes, the closing holes to the back nine are brimming with personality. No. 15 is a dainty 354 yards from the tips, but the hole doglegs hard right. A precise tee shot must be played between three bunkers to leave a short approach for a possible birdie.

Take advantage because a bogey or worse might be staring you in the face at the 449-yard, par-4 16th, which demands a blind tee shot to another fairway that doglegs to the right. After a daring 179-yard par-3, guarded on the left side by water, the thrilling 18th awaits.

The price is steeper than most -- $75 Monday through Thursday and $85 on weekends - but the experience is worth it. A weekday price of $60 for a tee time before 10 a.m. is truly a steal for golf in Oakland County, which tends to be overpriced.

When asked what people have told him they like about the course, head pro Marty McCabe confidently answered: "Everything."

"People say it's off the charts," he said. "We've been fortunate. Nobody has had any complaints." 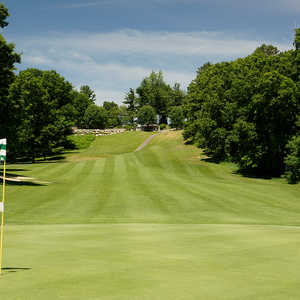