JACKSON, MI - This has been a big summer for golf course architect Ray Hearn. Hearn, whose offices are located in Plymouth, Michigan, can boast two of the biggest course openings in the state: Moose Ridge in South Lyon, and Grande Golf Club in Jackson. And though the two courses share a number of Hearn hallmarks, they also diverge in a number of crucial respects, showing both the consistency as well as the diversity of Hearn's design palette.

Whereas Moose Ridge is very much a "Northern Michigan" course, with it's extremely tight tree-lined fairways and up-North green fees, Grande (pronounced "grand" despite the final "e") features expansive fairways, sprawling wetlands, and greens that measure on average an astounding 10,000 square feet.

Steve Southard, General Manager of Grande, stresses the difference between his course and many of the newer courses in the southern half of the state: "It's the biggest cliché to say a course offers ‘an up North experience'. We're the furthest thing from that. In fact, we're a ‘down South' course that looks like it's on the islands off South Carolina."

At 7,156 yards from the tips, the par 72 Grande does indeed have a distinctive feel, not often encountered in courses in this part of the country, or at this price range. The most golfers will pay here, even at peak times, is $50, including a cart. And for that reasonable price, they can choose between five sets of tees (ranging from 7,156 to 4,993 yards) from which to attack the many forced carries over wetlands and daunting second shots to well-bunkered, sometimes wildly undulating greens.

"You can afford to spray the ball off the tee a bit," says Southard. "But the putter better be working, because with greens this large, it's easy to be left with some 100 to 120-foot putts." Like I needed him to tell me and my six three-putts this. Rarely does one see the combination of contouring and subtleties in greens that one sees at Grande. And the effect is both impressive and vexing.

The course owner and builder, Doug O'Rourke, has built a lot of courses. So with Grande, he took everything personally and missed no details. Southard notes that "[O'Rourke] has seen a lot of courses skimped on in the first couple of years, and then you fight to make it up for years afterwards." In order to avoid this fate, O'Rourke put in all of the crucial, yet underrated details: wall-to-wall cartpaths, with curbing to keep water from washing uncontrolled from hillsides over greens and fairways; drains throughout all the fairways; irrigation over every square inch of the course; liberal bunkering from fairway to green, many simply to serve as aiming points or "frames" for the landing areas.

What is perhaps most remarkable is that the first earth wasn't moved here until June 2000. Seeding began in September 2000. And amazingly, the first nine opened already in May 2001, and the second nine in June. If this isn't a record, it must be close. Yet despite the speed with which it came into being, Grande displays only a hint of its tender age. In one or two spots, the fairways were a touch squishy, and on one or two greens, the roots seemed a bit thin. Nevertheless, golfers would be hard pressed to find a bad lie or bumpy putt anywhere on the course.

The layout is fair yet challenging for players of all skill levels. With five tee boxes, the course takes on a quite different look from the different teeing stations. The North Course measures 3,429 yards from the pro tees, and the South Course 3,727 yards. The two nines are thus named because the course employs a cross-teeing method of the sort used in many Myrtle Beach courses. This means that golfers are sent off on both nines, allowing for higher volume with fewer back-ups. As such, neither nine feels any more or less like an "opening" nine or "closing" nine.

The 586-yard 2nd on the South Course epitomizes the "down South" feel Steve Southard is talking about. Your drive from either the tips, the golds (581 yards), or the blues (548 yards) must carry an intimidating expanse of marsh. The enormous fairway bunker beyond the wetlands is your target, and it looks much closer than it is. Oh, and by the way, if you crack a great tee ball, you may still hit the large tree that rises menacingly between the marsh and the bunker. Of course, there's a more-than-generous bailout area to the right, but if you land there, you'll have no hope of clearing yet another marsh, separating the first half of this angled fairway from the second. Best bet: Grip it and rip it just to the left or right of the tree, and keep your fingers crossed. And note the drop area on the other side of the first marsh.

The 455-yard, par-4 4th is particularly deceptive and wicked. Sand runs basically down the middle of the fairway from the main landing area to the green. There is far more room on the right than it appears off the tee. And let me tell you, leap-frogging from one trap to another on the way to a double bogey is about as much fun as accidentally sitting on the pointy end of your golf umbrella…and having it open before you can extract it.

At 439 yards from the black tees, No. 9 on the South Course is this course in a nutshell: The elevated tee looks out over a stretch of wetland and, eventually, a fairway nearly as wide as a football field is long. Smack-dab in the middle is an amoeba-like bunker that must be carried or delicately evaded on either side. To be honest, the outline of the fairway here looks like one of the space ghost entities from the old Space Invaders video game. (I swear I wasn't drinking when I noticed this.)

On the North Course, Nos. 4, 6, and 9 are the juiciest. On this side, as on the South, you'll find extraordinarily wide fairways, which might not look so wide off the tee. Many of them open dramatically at the 150-yard stakes, providing safe haven for even pronounced slices and hooks. But again, as on the South, the greens of the North are so large, and often partially obstructed (e.g., the 2nd and 5th on the South) or well-guarded by traps and hazards, that poor tee shots leave awkward seconds.

The 502-yard, par-5 4th is the only hole with a good bit of "up North" ambiance. The tee shot is uphill to a fairway that is comparatively narrow and lined with dense woods. From the top of the hill (nearly 300 yards from the tee), its all downhill to the green - and a wild ride it is. You really don't get a feel for how undulating the fairway is until you reach the green, which features a trough running east-west through it. Standing in this trough, desperately trying to read a triple-breaking par putt, I gazed back up the "Perfect Storm" fairway, and was overcome with the same sort of shortness of breath I get when standing chest deep in a gathering surf. Feeling a bit seasick, I missed the putt, of course.

The 377-yard 6th is one of the most picturesque short par 4s around: Another tee shot over a marsh is required, and a pond with a lovely stone wall guards the green on the right. Note that the bunkers in front of the green are much farther from the putting surface than they appear. Classic Hearn.

Many of the holes on this course offer tantalizing risk/reward situations, and the 427-yard 9th on the North Course is the prototypical example. It's a classic cape hole, sweeping from left to right around a gaping wetland. Now, you can bail out left, and face the jeers and catcalls of your playing partners. Or, you can live like a golf writer, gird your loins, and smack the living snot out of the ball and end up a 2/3 sand wedge from the green. Of course, if you can't putt any better than a golf writer, you'll also still bogey this hole.

The 296 acres the Grande is built on is dotted with wetlands and elevation changes, both of which are immense assets to the layout. The holes are isolated, and as a result, walking is not allowed. The 300-yard imbalance between the nines may cause some issues with players who want to play around 6,000 yards. One option is to play the whites on the South and the blues on the North. Other minor blemishes are the views of a trailer park on No. 5 and of the highway on-ramp on No. 7, both on the North Course. The electrical pole and wires crossing the 7th fairway will be buried in October, fortunately.

All in all, for the money, Grande Golf Club is one of the best buys in the state. And, according to Steve Southard, rates won't increase much when the clubhouse is built sometime next year. The practice facilities are first-rate, with a spacious (and well-bunkered!) range, and both chipping and putting greens. The course owners and management are also committed to value in other aspects of service: "You won't find ballpark prices for our hotdogs," promises Southard. "Even our apparel is reasonable. You can get a nice logo hat for just twelve bucks."

Ray Hearn is clearly on a roll. With the Grande and Moose Ridge, he's almost assured a slew of new course awards on at least the state level, and perhaps nationally, too. Grande offers a different golfing experience and a welcome change in price range to golfers in Southern Michigan. In a word, it ain't just a marketing ploy - Grande Golf Club is truly grand. 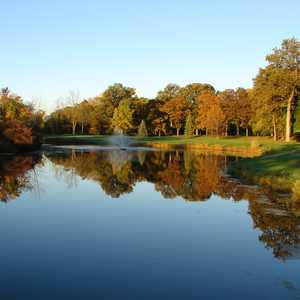 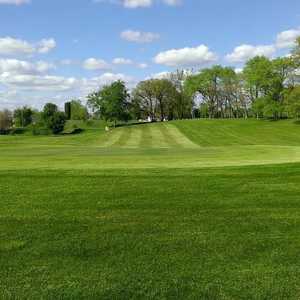 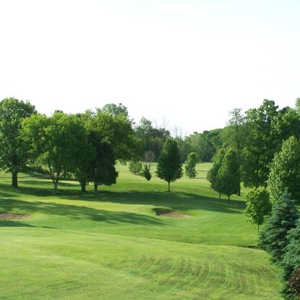