Cherry Creek Golf Club: It Only Feels Like a Private Club

SHELBY TOWNSHIP -- How good are the amenities at Cherry Creek Golf Club? With its cathedral-sized clubhouse and unparalleled practice facility, many people swear Cherry Creek must be a private country club or a semi-private facility, at the very least. The course, located in a growing rural area in Macomb County, is neither, except a good golf experience that anybody can enjoy.

Opened in 1995, Cherry Creek has matured into one of the best public golf courses in the southeast corner of the state. Fortunately, the greens fees don't reflect that. Township residents can play 18 holes during the week for under $50 ($47). The most expensive price, $60 for non-residents on weekends and holidays, is well worth the money.

"We are in as good of condition as any private course you will find," Cherry Creek President Bob Shaw said. "We give you an up-north atmosphere in Shelby Township with the tree-lined fairways, the huge greens, and the wetlands. Those all make for a great golf course."

Current Senior PGA Touring pro Lanny Wadkins and local golf developer Mike Bylen teamed up to design the unique 6,784-yard, par-72 layout. Even before players hit the links, they are sure to be impressed with Cherry Creek, which is also affiliated with Pine Trace Golf Club in Rochester Hills and the recently opened Shepherd's Hollow Golf Club in Clarkston.

After being picked up by a cart attendant in the parking lot, golfers are dropped off at the 19,000-square-foot clubhouse/banquet center, which is a sight in itself. With its grand steeple and white columns, the stately building was named the best clubhouse/19th hole in southeast Michigan in a readers' poll by Crain's Detroit Business magazine in its April 3-9 issue (2000).

Inside, the pro shop is spacious and well-stocked. To the left, the Ryder Cup Grille emits tempting smells. The locker rooms, furniture and decor are first rate. Adding to the ambiance, Wadkins, the captain of the 1995 U.S. Ryder Cup team, donated memorabilia from his eight different Ryder Cup matches. Sitting in a glass display along with autographed shirts and hats, his captain's bag is signed by some of the game's greatest men - Couples, Mickelson, Lehman, Pavin, and Love among them.

Outside, the large, brick-lined terrace is a wonderful place to enjoy a drink after a round and talk about the day's bogeys. It overlooks the lake along the first tee. Just off the parking lot, the practice area houses a driving range with 50 hitting stations and seven target greens, along with two putting greens and two separate chipping greens complete with bunkers.

Oh, and let's not forget about the golf course. Shaw said the course's conditions has improved dramatically in the last year. Course workers have revived several damaged greens and he said he recently spent about $10,000 to improve the fairways. The TLC shows up in playing conditions. The wide, lush fairways roll gently through a secluded 218-acre piece of relatively flat land.

The course begins with two tough doglegs, the 450-yard second hole (back tees) and the 424-yard fourth hole. These two could play shorter if players are brave enough, and long enough, to cut tight corners in between trees.

The fifth hole, a 491-yard par-5, is short enough to surrender a birdie, but it's also dangerous. It doglegs right at the 200-yard mark, climbing uphill over a creek to a huge, undulating green.

No. 8, a 318-yard par-4, is the first of two short, target-style golf holes (the 401-yard 11th is the other). Players should plan to hit a 200-yard iron over a marsh to set up the approach to an unseen green, which is guarded on the front-side by mounding and four bunkers on the right.

The back nine can be forgiving for solid players, maybe even relinquishing a career round, or wreak havoc on the weekend golfer. It boasts nine different shots that must carry water or wetlands, including a tough 180-yard carry from the blue tees of No. 14, a 547-yard par-5. This hole starts a fun finishing combination of three par-5s and two par-3s - which is a scorer's paradise, considering that par-4s are statistically the toughest holes to par. The 18th, a 538-yard par-5, is the course's signature hole, as it shares the lake with the first hole.

To make everybody's day a better one, Cherry Creek has taken an aggressive stance against slow play, putting clocks on every tee, a subtle reminder that people should play ready golf. Rangers are also sure to cruise by every couple of holes.

"The clocks are not there to intimidate people, although it does with some," Shaw said. "It is to show them the pace of play that is good for everybody. If you can see the group in front of you, you're fine. Nobody likes a 6-hour round of golf."

Shaw said the course also tries to promote the sport of golf itself, conducting lessons for women and programs for juniors, along with its standard private and group lessons. The past several years Cherry Creek has erected a portable golf dome with 22 separate practice bays to keep golfers in swing all winter long, but Shaw said the decision to continue this tradition in 2001 is still up in the air.

Cherry Creek remains open year-round thanks to its off-the-course business. Shaw said lunch at the Grille is a big draw, thanks to the work of head chef Bill Dion, who used to cook for guests at the famed Oakland Hills Country Club. Weddings are a popular attraction, too. By taking down a few walls, the clubhouse's three banquet/meeting rooms can become one, seating up to 450 people for large weddings and conferences.

Cherry Creek takes pride in its ability to entertain just about anybody -- whether you're looking for a bite to eat, a relaxing, speedy round of golf, or something as glamorous as getting married. Tee times can be booked on-line at www.cherrycreekgolf.com or by calling 810-254-7700. 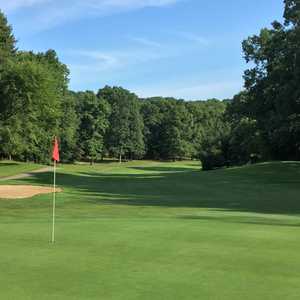 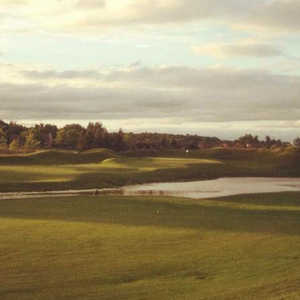 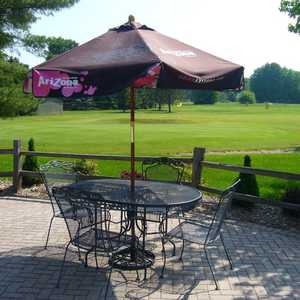