OXFORD, Mich. -- Since opening in 1995, Devil's Ridge Golf Club has played as tough as the name suggests.

Devil's Ridge Golf Club rambles up and down some of the most scenic terrain in northern Oakland County.
«

Devil's Ridge Golf Club is ranked as one of Michigan's top courses. The course wanders across more than 400 acres of forests, wetlands, and rolling hills. The diverse landscape has the ideal terrain for a challenging round.

This diabolical 6,754 yard, par-72 layout, which rambles up and down some of the most scenic terrain in northern Oakland County, has earned a reputation among golfers as either a course you will love or one you'll hate because of its target golf style. But course officials have been working diligently to make the layout more playable, giving customers something to smile about when they walk off the 18th green.

Workers have been attempting to clear out large areas of underbrush and clumps of trees, without taking away the course's appeal - the feel that golfers are enjoying nature in the back woods of northern Michigan, not an area just outside of Metro Detroit.

Devil's Ridge Head Professioal Rick Fleming says instead of driving four hours north, Michigan golfers can find an "up-north" golf course close to home. Devil's Ridge, which is accessible from M-24 (Telegraph Road) about 15 miles north of the Palace of Auburn Hills, was given a three-and-a-half-star rating by Golf Digest in its 2000-01 rankings.

"A lot of tree clearing has opened the course right up," Fleming said. "One of our biggest complaints is people lose a lot of balls. But with the work we've been doing, people are losing less balls, their scores are down, the pace of play is up. That makes for a lot of happier people. And we don't feel we've compromised the course. It still has that up-north feel."

But the best player-friendly addition debuted in March when ParView, a computerized scoring/yardage system, was installed in every cart. There's not much ParView can't do, except swing the club for you. With the system's detailed yardage system, golfers don't have to search for hard-to-find yardage markers or waver back and forth deciding which club to hit.

It gives the distance to the front, center and back of the green; the pin's distance from the center of the green and yardages to clear hazards like bunkers and water. It also provides a detailed map of each hole's layout.

ParView can keep score for players, and during tournaments, it displays the leader board as it is updated. Players can also order food from ParView's menu and pick it up at the halfway house or after the round. It is also useful for course officials. It keeps track of each cart's pace of play, letting golfers know they should be playing a certain hole at a certain time. If you are behind, the rangers will find you. ParView's messaging feature can send out storm warnings as bad weather approaches.

"(ParView) is so unique to this area, we are really selling it right now," Fleming said.

ParView was really an essential addition for Devil's Ridge's survival in Michigan's competitive golf market. The course's layout can be quirky at times, including the controversial No. 10 signature hole. Plus, the landscape's constantly changing elevation forces players to hit those dreaded blind shots time and again. ParView provides players the know-how to tackle every hole, if they are on their game.

Devil's Ridge plays much tougher than its 123 slope indicates. There are only 14 bunkers on the entire property, but water and wetlands more than make up for the lack of beaches. Except for the first two holes (a stream is being added to No. 1), water comes into play on every hole on the front nine, which only plays to par-35 with three par-3s.

The back is more forgiving with only five carries over wetlands, but it is also 400 yards longer, playing to par-37 with just one par-3.

No. 1, a 350-yard par 4, is an appetizer of things to come. A lush fairway, framed by some wicked rough and a wall of trees on either side, sits nearly 50 feet below the tee. This hole used to be much tighter until a number of trees were removed. No. 2, a 204-yard par-3 nicknamed "Demon Drop," doesn't play that long with the plunge to an expansive green.

The 489-yard par-5 third hole is where the deception begins. The best advice off the tee is to stay right of the oddly placed electrical box. The peninsula-like green is surrounded by water on the front and each side.

No. 4, a 163-yard par-3 called "Wicked Water," is a testy little shot over more water. No. 5's poor design forced course officials to plant trees and post a sign telling players to hit to the right to protect players on the No. 8 tee. At 461 yards, it is easily the longest and toughest par-4 on the course.

At the controversial, 400-yard 10th hole, players must drive to a tiered fairway about 50 feet above their heads. With little to see or aim at from the tee box, course officials added a large target sign to make this shot more manageable. Once up on the ridge, the hole plunges downhill to the green, which slopes severely from left to right. Good luck getting par here. Fleming said No. 10 played a major factor in how the course got its name. Originally, it was to be called the Oakwood Golf Club, he said.

"The story is that as they were building the course, the workers were having trouble working on the ridge. One of the workers said that the devil had something to do with it, so it got the nickname Devil's Ridge," Fleming said. "It stuck and we began naming the holes for a streamline theme."

The home stretch from No. 16 on is quite tame considering what you've faced. After No. 16, a wide open par 3, No. 17 and No. 18 require lay-up shots of about 200 yards off the tee and then precise irons over a water and a valley, respectively.

Other amenities, like summer-long memberships, make Devil's Ridge a top-notch place to play. Fleming said the course hosts a ton of outings every summer with its 220-person banquet center, the Oakwood Room, and its outdoor patio. The Devil's Grill in the clubhouse and the Oakwood Room, which is also home to weddings and other gatherings, provide stunning views from the all-glass wall facing the course.

Group and private lessons from PGA Professionals are also available, along with club repair. 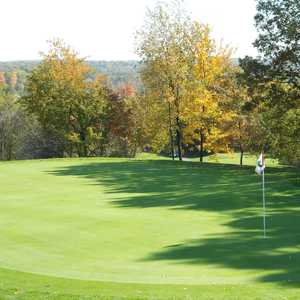 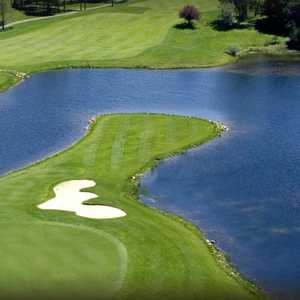 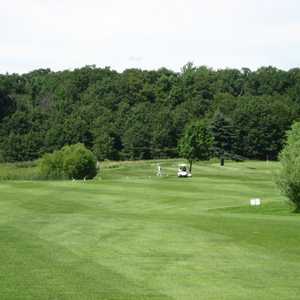